In our series of articles, we will cover everything you need to do in order to beat the game – so if you ever get stuck, make sure to check out this walkthrough guide here and you’ll be quickly back on track.

We’re starting the series with the full solution to the first two chapters in We Were Here Together. Things start out relatively easy, but they become more and more complicated as you progress and this is why we’re here to help.

We Were Here Together Chapter 1 Walkthrough (The Signal)

Getting the Valves / Wheels

First thing that you have to do in the game is to get out of your room and find your partner in one of the other rooms. Then, your first challenge is to collect the wheels (aka Valves) that are scattered throughout the cabin.

They are relatively easy to find and all that you have to do is explore the area. Here are their locations:

1. As soon as you exit your room, get into the radio room (pictured above) and grab the valve.

2. Out in the main room, to the left of the radio room, you will find one on the kitchen counters to the left.

3. Go to the other side of the room, where the wood stove is, and grab the third one to the side of the stove itself.

4. Go outside and explore to the left side of the building until you get behind the house and find a wheel that’s frozen (inside an ice block). Pick it up and bring it back in, then place it on the stove to let the ice melt. Afterwards, pick it up.

5. For the final valve, you will also have to go outside: find the area where snow is high enough to allow you to get on the roof – and find the final wheel under the radio antenna there.

Next thing on the Agenda is fixing that radio signal. In order to do this, you will have to get back on the roof and place the wheel with a plus sign on the radio signal equipment bit.

And this is where things get a bit complicated, because you will have to work with your partner in order to get this sorted out: one of you must stay on the roof, while the other has to go back in the radio room inside the house.

Once you’re both in position, you start working to fix the radio signal:

We Were Here Together All Endings

The player on the house will switch the wheel to the right until you get that colored wave on the screen that gives you a voice transmission (I only took a screenshot of the purple one, which is not it – it’s a music station):

The other player in the room will have to push the buttons in there (without actually seeing anything) until the green line matches the pattern of the colored one. First work the height (by pushing the down or up arrow on the control station), then the speed, by adjusting with the left or right arrow.

When you get this done, you will either hear music or a voice. You need to get the voice radio – unfortunately, we didn’t write down the color that it should be correct (could be random with each playthrough) but judging on the colors from the bottom screen, we believe that it was the BLUE line that you need to match. So start with that.

Now that you finally have radio, go to the room with the map inside the house. That’s where you will have to use the wheel to pinpoint the correct locations on the map, This is again something that you must to together with your partner, otherwise the wheels reset.

So one of you must stay with the left wheel (that controls movement right-left) and the other one with the right wheel (controlling up-down movement).

If you want to try and solve it by yourself, I am listing the coordinates below. But if you don’t manage, I have the solution in the photo below (as well as explain how to do it):

I am not sure if you must triangulate the position in the correct order, but you might as well try this: first go to the hut in the upper left side of the screen, then go to the tower below it, towards the button and finally the cabin on the hills, slightly to the right:

Now that you know the location of the people transmitting on the radio, you need to actually go out there and save them. But first, you need to fuel up your vehicle.

In order to do this, one player must go outside where the tanks are, while the other should stay near the reservoir that’s in the garage, close to the truck.

Once you’ve done this, both players should move to the vehicle and get in.

We Were Here Together Chapter 2 Walkthrough (The Elevators)

This one is pretty annoying, actually… and you’ll probably end up hating elevators afterwards. I know we did, but we eventually figured them out, so here’s what you have to do to go up the mountain.

First, both players should get inside the first elevator (with a diamond drawing on the floor) and go up.

Now, the two players must split up: one must go to the elevator with the dynamite to the right, and the other to the left. The player in the left elevator has to go down twice (hit the down arrow twice), taking the other one up.

The player to the left should get to the dinosaur elevator as well by getting on top of their pickaxe elevator. When they are both in, one of them should go all the way to the top and exit the elevator, then the other one does the same.

And finally, both players should pull the switches next to the entrance at the same time, then enter the cave. 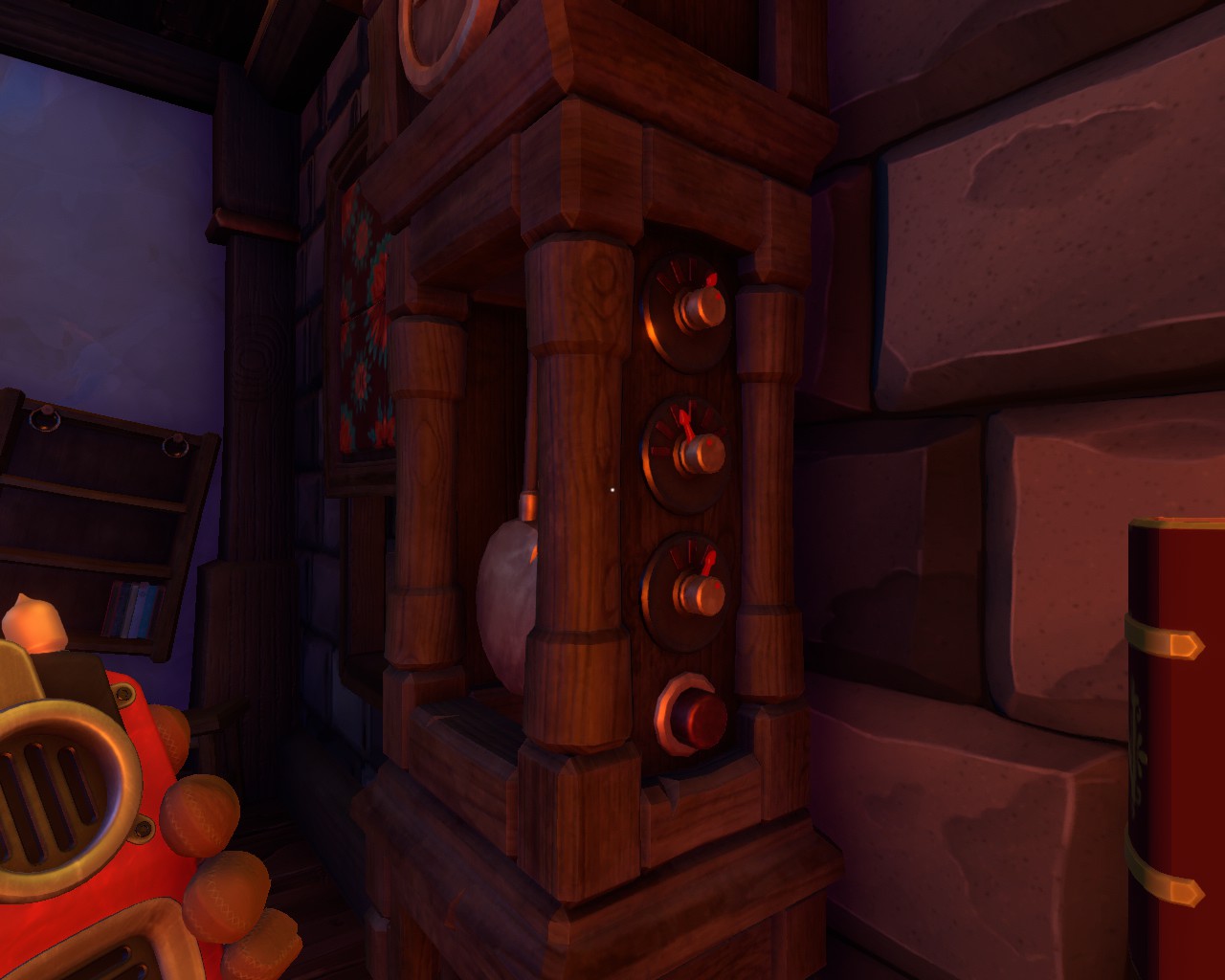 This would be our guide to the first two chapters of We Were Here Together. Stay tuned, as we’re working hard to come back with the solutions to the next chapters as well!

If you have additional questions of any sorts, don’t hesitate to let us all know by sharing your comments below. Also let us know if there are any alternative (maybe easier) solutions to the puzzles and challenges in these first two chapters.

We Were Here is a franchise of cooperativefirst-personadventurevideo games, created by the Dutch studio Total Mayhem Games.

A PlayStation 4 release of the series was announced on September 24, 2020. The release date has not been announced.[6] 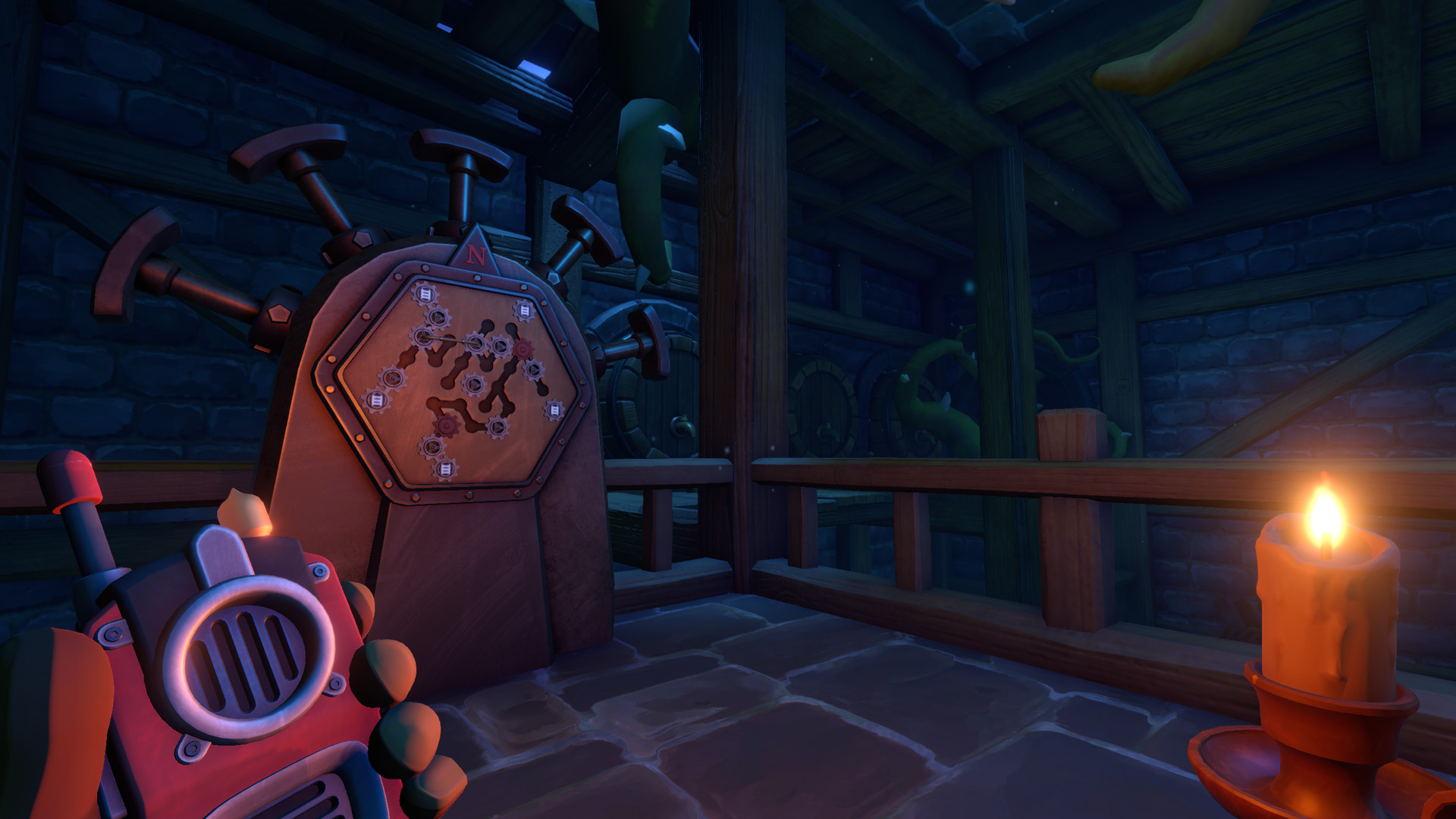 The first We Were Here was developed by Dutch studio Total Mayhem Games as part of a student project while studying at the Rotterdam University of Applied Sciences. It was a student entrant for the Independent Games Festival 2018, and won the Best Indie Game Award in 2017 at the Indigo showcase in the Netherlands.[7] It was released for free on Steam in February 2017, and later on Xbox One in September 2019.[8][1][2][3]

We Were Here is a cooperative first-person puzzle video game developed by Total Mayhem Games from The Netherlands, released for free on February 3, 2017 on Steam for PC. Two players take the role of Antarctic explorers who have become split up in an old castle, called Castle Rock. They must solve puzzles by communicating via walkie-talkies.[8][9] It was released on Xbox One on September 16, 2019, and was featured in Xbox Games with Gold for September 2019.[2][3][10][4]

We Were Here Too was the first commercial release by Total Mayhem Games. The gameplay is similar to the original We Were Here, with two players who are split up and must solve puzzles by communicating via walkie-talkie. The game was released on February 2, 2018 on Steam for PC, and on October 2, 2019 for Xbox One.[1][9][11][4]

We Were Here Together was released on October 10, 2019 on Steam for PC, and on June 5, 2020 for Xbox One.[12] In a twist on the series' usual gameplay, players spend some of the game in the same area together, where they can both visit the same locations. There are new locations including the base camp where their expedition began, ice caves, and Antarctic outdoors. Working together is still required to progress.[13][14][15] 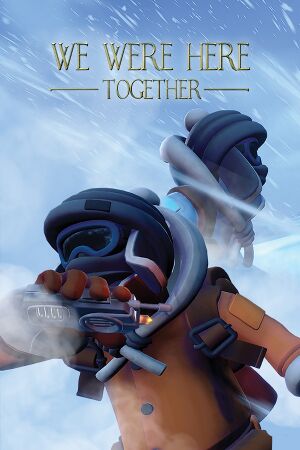 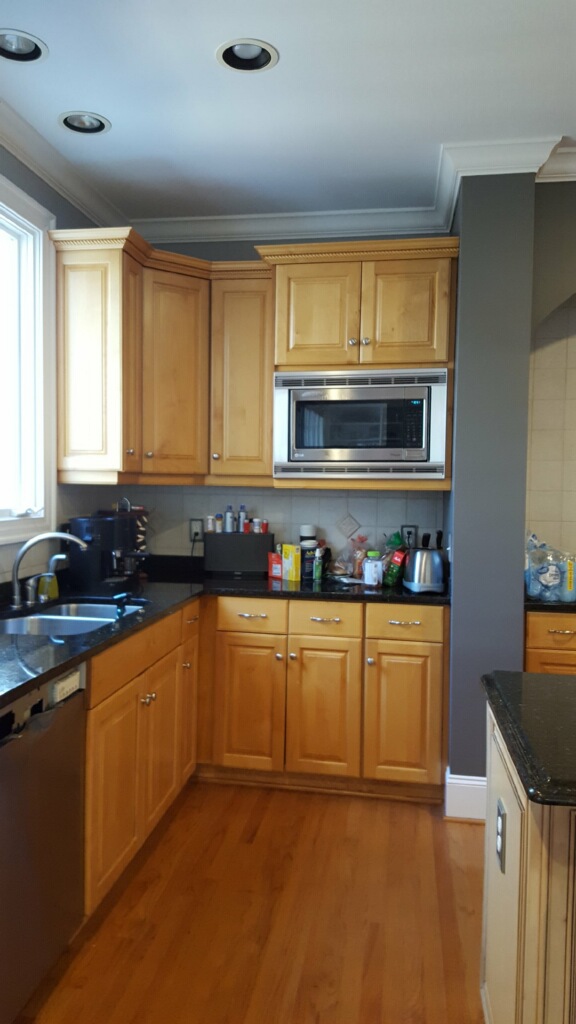 We Were Here was released for free, and does not have enough reviews for a Metacritic rating. On Steam, user reviews are 92% positive, out of 9,859 reviews. In their review of We Were Here Too, Adventure Gamers described the first game as noble, saying that 'though bite-sized, it offered a neat concept and was well received'.[16][19][20]

We Were Here Too received review scores between 60 and 75, with outlets largely praising the puzzles and core gameplay, but noting that the game was fairly short. Adventure Gamers found that 'solving puzzles co-operatively is very satisfying', but criticized the game for being short and lacking detailed story. Vgames praised the puzzles and atmosphere, but also found it short and lacking replay value. PLAY! Zine described the puzzles and communication gameplay as strong points, but criticized the story and some technical issues.[20][21][22]

We Were Here Together received more positive review scores than We Were Here Too, ranging from 70 to 85. The puzzles and core gameplay were well received, and critics appreciated the game being longer than its predecessors. However, the narrative part of the game was largely seen as underwhelming or distracting. Adventure Gamers praised the puzzles and communication gameplay, while encountering some technical issues and finding the story unclear. Game Watcher described it as 'a must-play for fans of both co-op adventures and challenging puzzles', while also noting some technical issues. Games.cz called it 'by far, the best installment of the whole series' but noted 'It’s just a shame that the story is so weak it’s barely even there.' [23][24][25]

We Were Here Together Chapter 7