I couldn't spot any, but are there any modules/game add ons that just provide the rollable tables for magic items from the dungeon master's guide? I'm dead lazy and don't want to have to build them myself:) Alternatively can they be transmogrified from another game, if anyone has already set them up?&nbsp. See the 5e DMG pp. 150-214 for the full list of magical items and see 5e SRD:Magic Items for magical items that appear in the System Reference Document(SRD). In terms of magical item balance, remember that items that give bonuses that you don't need to hold are better than those you do need to hold, as demonstrated by the +2 shield and the +1. Magic Item Table D d100 Magic Item 01–20 Potion of supreme healing 21–30 Potion of invisibility 31–40 Potion of speed 41–50 Spell scroll (6th level) 51–57 Spell scroll (7th level) 58–62 Ammunition, +3 63–67 Oil of sharpness 68–72 Potion of flying 73–77 Potion of cloud giant strength 78–82 Potion of longevity 83–87 Potion. Extended magic item tables actually containing all 5e items. Magic item tables from the DMG, they miss out on a lot of magic items from the.

I’m not talking about magic items: sure, I’m a little sick of potions of giant strength, but D&D has a generosity with its magic item list that I very much appreciate (more than 300 items in the DMG!). I’m talking monetary treasure.

This problem doesn’t come up much in my regular D&D campaigns, because neither I nor my co-DMs use the loot tables in the 5e DMG. After all, there’s not much to spend money on in non-houseruled 5e, so you can make up literally any amount of money and it makes no difference to game balance.

Even without much to buy, discovering treasure still is (or should be) fun. As a DM, I’ve always liked rolling on treasure tables, and as a player I like uncovering exciting caches of gold and jewels. But when I stick to the letter of the law, as I’m doing in this playtest, the defects of the 5e treasure tables become apparent.

In the course of a recent dungeon delve down to level 3 of a random dungeon, I’ve written down the treasure hoards we’ve found. Here are a few of them:

When I listed them out like this in my notes, it became clear to me that, apart from magic items, every treasure I found was going to look exactly the same. Around 2000 copper. Around 1000 silver. Around 100 gold. Maybe 6 or so handful of gems or art objects. Every. single. time.

There are a few main problems with cash rewards in 5e: 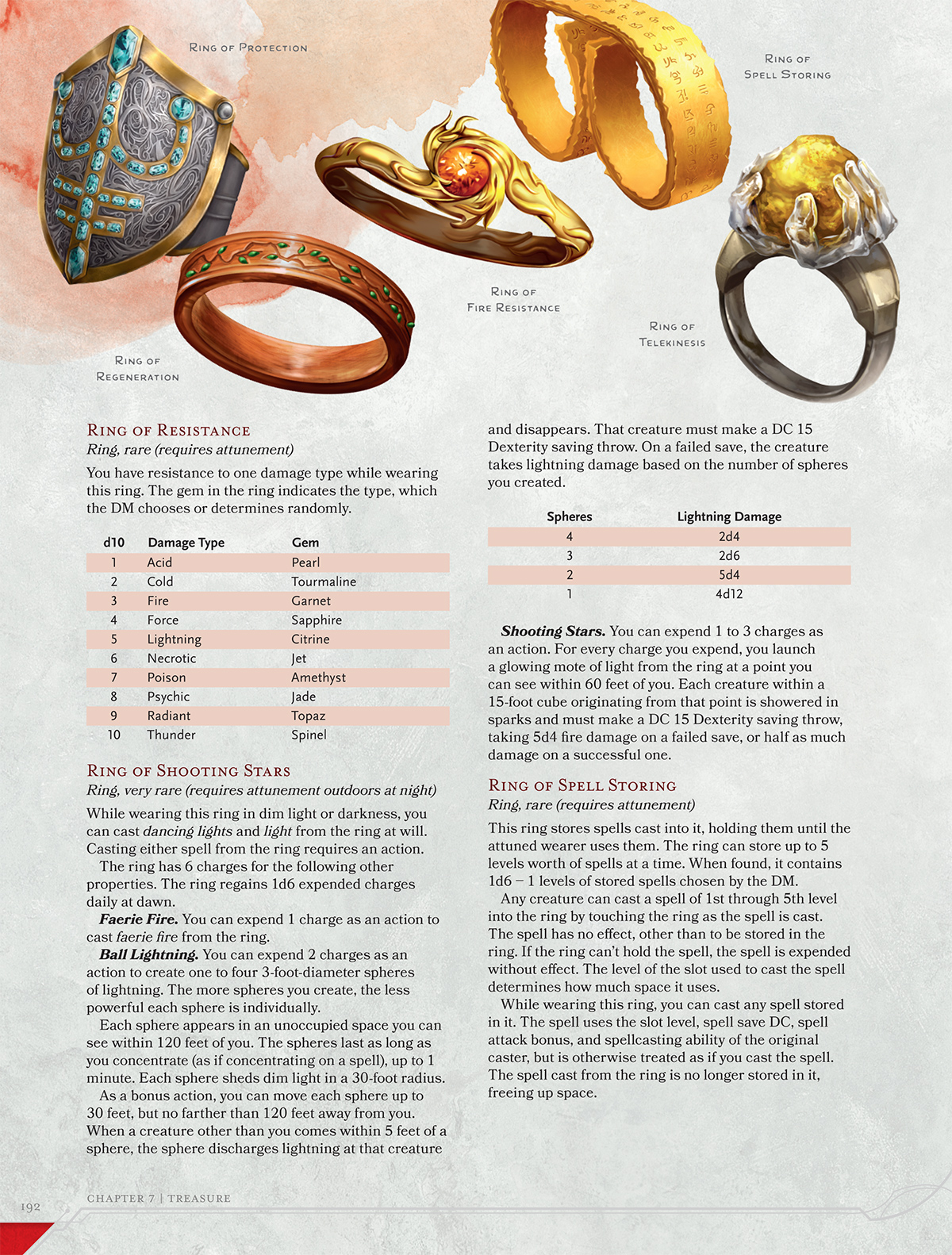 There’s not a new chart every level. You roll on the exact same treasure chart for all encounters from CR 0 to 4, and then graduate to the next chart up, which you use for six more levels, and so on. Each treasure table generates a coin value ten times the last one – a huge jump. It’s too big a jump, too infrequently. If the devs had found a way to divide this increase evenly over every level, then each level could have been worth 50% more than the last: a noticeable increase each level, and one that gives meaning to choices about challenging an easier or harder foe. (Right now, four bugbears have the same expected treasure trove as four kobolds. Level 3 of the dungeon has the same treasure as level 1. Why venture deeper?)

Every treasure hoard of a given tier group has exactly the same coinage mix. For all of CR 0-4, it’s impossible to roll up a treasure hoard containing electrum or platinum, and it’s impossible to roll one WITHOUT about 2000 copper, 1000 SP, and 100 GP. There’s a bit of variation when it comes to the gems and art objects rolls, though you will never find a solitary gem or art object (the smallest number of either you can find is 2d4, and the average is 7).

You’ll also never find a cache of gems or a magic item without some attendant cash. Every randomly rolled treasure must contain money. After the Lady of the Lake raises her arm from the water to give Excalibur to Arthur, she also tosses 42,000 gp and 28,000 pp ashore.

There are more interesting variations in the “individual treasure” tables, but unfortunately that’s all pocket change.

There’s little roulette-wheel drama in 5e monetary treasure: no sense that you could stumble on a big score (except by DM fiat). The only meaningful variation is in whether you get gems or art objects, and how many of each. On each treasure table, the best gem or art object result occurs about 20-30% of the time, so it’s not particularly unusual; and apart from the lowest tier of play, the best possible gems/jewelry roll can increase total treasure value by about 10%, so it can almost be ignored.

you know what? The minor point that I mentioned before, that you can’t roll up a single gem or art object, is actually a big problem for me. A single well-described piece of jewelry or idol, or a fist-sized emerald with a strange flaw, could grab someone’s imagination. However, gems and art objects generally come in packets of seven. Rolling up and describing seven art objects is an exercise in tedium for the DM and player.

DM: … encrusted with rubies; and, finally, a goblet etched with a baronial shield and the motto EVER TRIUMPHANT.
PLAYER: ….. ok, so… seven art objects worth 2500 each, get it. (instantly forgets every detail)

Since gems and art objects are just interestingly-described cash, there’s no point in presenting them in numbers that repel description. I might make up one or two interesting art objects that give flavor to my setting, but not seven.

I’m not sure exactly what was going on with treasure tables during the development of 5e, but I think that most of the problems stem from a single design decision: making the treasure tables require only one percentile roll to generate the whole treasure.

After a single d100 roll, you know almost everything about the treasure: what types of coinage you get; the number and denomination of gems and jewelry; and what magic item tables to roll on. Compare that with, say, the 3rd edition level-11 table, which required 3 d100 rolls: one for coin type, one for art/gems, and one for magic items.

I think the decision to go down to one d100 roll in 5e had to be a deliberate choice. But it was one with some bad consequences.

No roll for coin type

In the 3e chart, you roll to see if you get silver, gold, or platinum. (It’s a little weird that you can’t get a mix of coins, but whatever.) Each of the possible coin types had a slightly higher average value, so rolling a higher-denomination coin was better.

In the 5e chart, you always just get gold and platinum, no roll required, and no variation between treasures.

Combining the art/gems and treasure roll

Look how big the 5e 11-16 treasure is! There are 33 rows. It takes up almost a full print page. And if you look closely, it’s not super varied. The 32 rows of the “gems or art objects” column are just alternating the same four entries over and over again, eight times. The 28 rows of the Magic Items columns are just repeating the same seven entries four times each.

In fact, this table looks like it was derived by listing out all the permutations of two much tidier tables. These tables don’t exist in print but I’m confident they looked like this:

If you map the permutations of these two charts onto one d100 chart, it perfectly recreates the existing 5e table, bar rounding error.

The big problem is, the two charts, while they require an extra roll, are more economical of space. If the two tables were printed side-by-side, as was done in 3e, you’d only use 8 rows instead of 33.

Combining every treasure and art/gems roll into a single roll matters a lot because it balloons the space requirements for a single treasure table. And, since book pages cost real money to print in an already fat book, you just can’t include a lot of these huge tables.

It takes more than half a page, on average, for each of 5e’s four treasure hoard tables. If you had one such table per Challenge Rating from, say, 0 to 21, that would mean devoting 12+ book pages just to treasure charts. That would mean cutting 10 pages of other content.

On the other hand, if they’d used separate d100 rolls for art/gems and magic items, as in 3e, they could probably have fit 22 such charts in around 3 pages.

So, once they’d decided to present giant treasure tables that required only a single roll, there was a real-world economic incentive to cut down the number of tables to four, one per tier.

Does limiting treasure tables to one d100 roll even make sense?

I’ve posited that the developers made a decision to limit monetary treasure generation to a single percentile roll. Is that even a valuable goal?

Not in my opinion.

So, assuming we are rolling for coinage and gems/art, we’re always making three or four extra rolls in addition to our percentile roll.

And that’s not even counting magic items! Look at the 5e CR 11-16 chart above. There is a lot of percentile rolling here! Some of the entries call for rolling up 1d4 magic items from one table, and 1d6 from another. Each of these d4 and d6 rolls requires further percentile rolls, so, on average, this table entry requires an average of eight rolls, most of them percentile rolls. Taking the table as a whole, you make an average of three and a half extra rolls to determine magic items.

In total, a DM is actually making around nine rolls to determine each CR 11-16 treasure. Saving that one extra percentile roll didn’t make much of a difference. 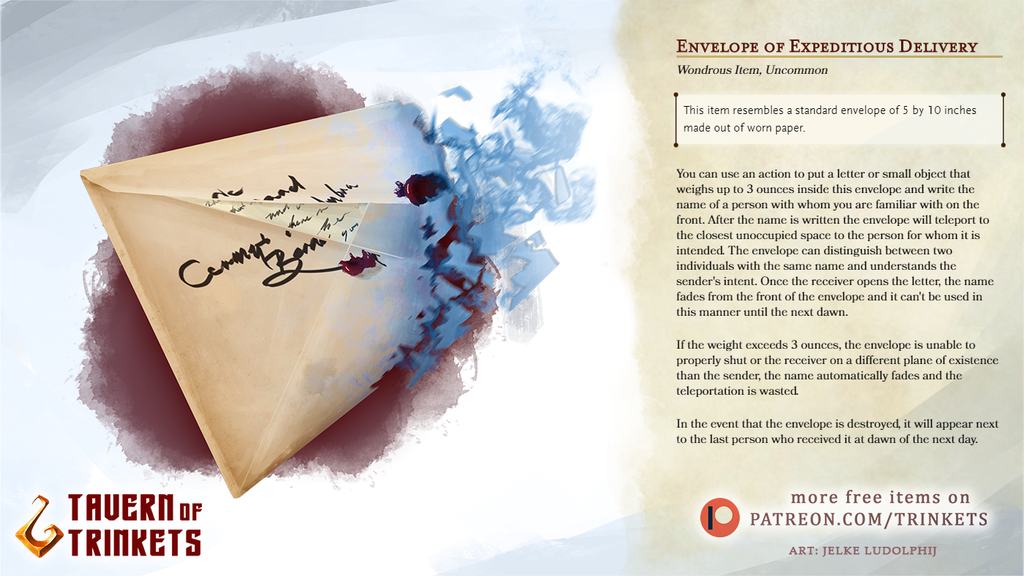 So now that I’ve exhaustively detailed my problems with 5e’s monetary treasure tables: can we do better?

I think so. I’d like to scrap the four 5e treasure tables and make (at least) twenty new ones. I think the in-game economics of 5e are fine as far as they go, I just think the tables could be presented better and the lumpy parts smoothed out.

In my next post I’ll look back at previous editions to see how they did treasure, and we’ll see if we can find the best model for how we’d like 5e treasure tables to look.

I have searched and searched for them, but so far had not seen the DMG loot tables anywhere. So, I decided to create the random loot tables myself. If this has already been done, I apologize for duplicating this. I do not have it all completed yet. I have the basic tables from individual and hoard loot of all the different challenge ratings. I only have been able to get Magic Item Tables A through G in. Once I complete, I will upload and share my tables for anyone who wants.
Also, is there a way to get a table result to auto-roll a NdN times on another table? If there is, I would love to know. So far I can only get it to do 1 new roll, which means the DM then has to figure out if there are more rolls to be made and manually roll off the table for the additional rolls.
Also, way down the road, I may add in every magic item as well, but currently I am only adding in the stuff my group finds for their use. There are tons, and I am sure you understand. I will add files once I get the rest of the Magic Item Tables completed.